I had the privilege of being on set in Grand Rapids, Michigan for the second half of filming for my script Silver Bells. (The first half was filmed in Manistee, Michigan. MUCH colder!)  Here’s a look at some of the fun we had. The movie stars Bruce Boxleitner, Antonio Fargas and Kenton Duty and will be released on UPtv in time for Christmas 2013!

I’m dressed as an extra at the Salvation Army Corps with Bruce Boxleitner, star of Silver Bells

Shooting outside the Salvation Army Corps in Grand Rapids

The rehearsed scene comes to life on the real location

Me and actress Laura Spencer as Kasey Dalt

I was an extra — a Salvation Army cadet — in this scene. Never let DP Mark Dadlani say it wasn’t all sunshine and rainbows! 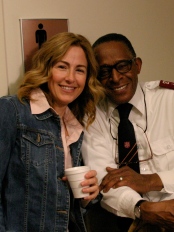 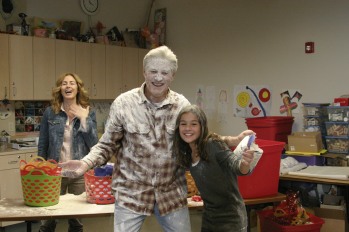 Never fight a little girl with a bag of flour 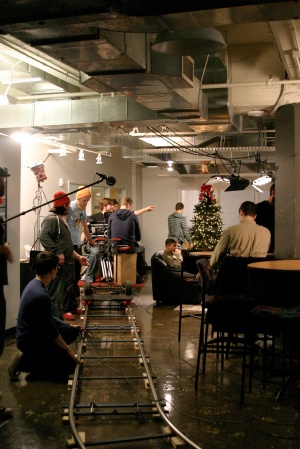 Bruce Boxleitner signs a giant Tron poster that was hanging up at one of our locations, Compass College for Cinematic Arts in Grand Rapids, Michigan

Me with Amy Kiser as Lesley Stiles, ambitious sports reporter

2 thoughts on “from the set of silver bells – grand rapids, michigan”

I am a wearer of many hats. Mostly metaphorical.

When I'm not juggling my hats, I'll write about them here.